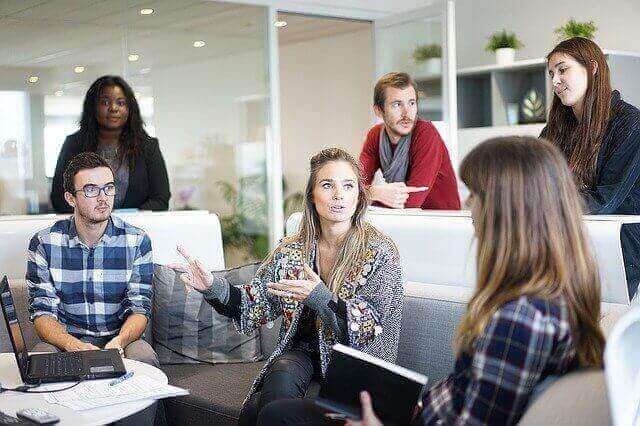 Communication is an activity in which living things exchange meanings by responding to each other’s signals. The Latin word communicare refers to “making something common.” This page covers the interaction between people, but there is also animal communication and plant communication. Communication is not only a social activity, but also the result of the contact: the sum of mutual meanings, also known as the communication effect.

In communication, information is shared with each other through sound (such as speech and tone) and form (such as image, symbolism and text). Contact also includes actions, because behavior reveals endless meanings. The impact of (un-) conscious acts can be very large in meaning assignments: non-verbal communication can even prevail over deliberately chosen words and symbolism. Think of the (un-) credibility of a conversation partner who claims that he is not nervous, but does sweat and tremble. Behavior must be interpreted broadly here: for example, architects can impress people by means of a building or put them at ease. The choice of the place and the movement or style used, violence, fashion, music and facial expressions are just a few examples that have to do with communicative action or behavior. Also through smell, warmth, light, color, intonation, taste and even by pauses or by being silent one can send meanings and obtain impressions. Since there is no such thing as anti-behavior, it is impossible not to communicate, the psychologist Watzlawick concluded.

Specific features of the communication process

Communication is a circular process in which misunderstandings easily arise. Paul Watzlawick’s five axioms can help to understand this complex process:

The essence of communication is that one or more transmitters and receivers regularly change roles within a certain period of time, thereby transferring meanings to each other. Communication can proceed consciously and unconsciously or subliminally; it is about sending and receiving alternately. In scientific models (which usually build on the mathematical work of Shannon and Weaver), this information traffic revolves around the message. Sometimes the intended or achieved effect is also expressed in such a model. The contact is through a channel, a technical medium (such as a website or fanfare), interpersonal (face-to-face, such as when talking, dancing or kissing) or via an intermediary (a third person such as an interpreter or mediator). Indirect communication can also occur if the communication takes place in two or more steps, for example via opinion leaders.

Telephony and chatting are examples of simultaneous communication, in which action and reaction follow each other immediately. For example, with a letter sent in, the interval in the contact is longer. The term feedback is used in this context for feedback or response to a communication initiative. The best-known basic model that depicts a communication process contains as elements a sender that sends a message via a medium to a recipient who then gives feedback on it. Since it is a mechanistic model originally developed for telephony, much emphasis is placed on terms such as encoding information by the transmitter (input) and decoding it by receivers. Because communication is a social rather than a technical process, more emphasis has been placed on meaning and explanation. A transmitter tries to transmit something and receivers interpret each in their own way. Disturbances in contact, miscommunication, are called noise from a technical perspective. Noise can come from outside (such as interference from noise) or from internal factors (not being able to read or understand each other’s language). From a purely technical approach, communication has also become a popular subject of study in the social sciences who are looking more for vitalistic and dynamic aspects of it. Because sender and receiver probably never have 100% the same final image, communication has sometimes been satirically defined as “talking as closely as possible”.

Characteristic of the contact in communication is its two- or multi-sidedness. For example, a reason is followed by a question, an answer, a counter-reaction, and so on. The reaction can come from a loner, but also from an audience. Communication ends when the interaction stops. As long as there is (an attempt at) one-way traffic, we usually call it information. Most messages that are sent or broadcast never arrive. Data only changes into information once it has been interpreted. An incomprehensible sign does contain signals, but if they are meaningless, there is no information processing. Only in theory ignoring information is a communication effect.

Communication and information are often used as synonyms in phrases such as: “Would you like to communicate this to the target group?”. One speaks of communication when it is still uncertain whether information will ever arrive, apart from how it is understood and processed. If the recipient, for example the reader of a book, is not in contact with the author, the contact is called one-sided. There is two-way or multi-sidedness with any form of response or feedback. There can be a large distance in time or space between sending and receiving a message: if someone responds to the work of a deceased filmmaker, this is only referred to as “communication” at the meta level.